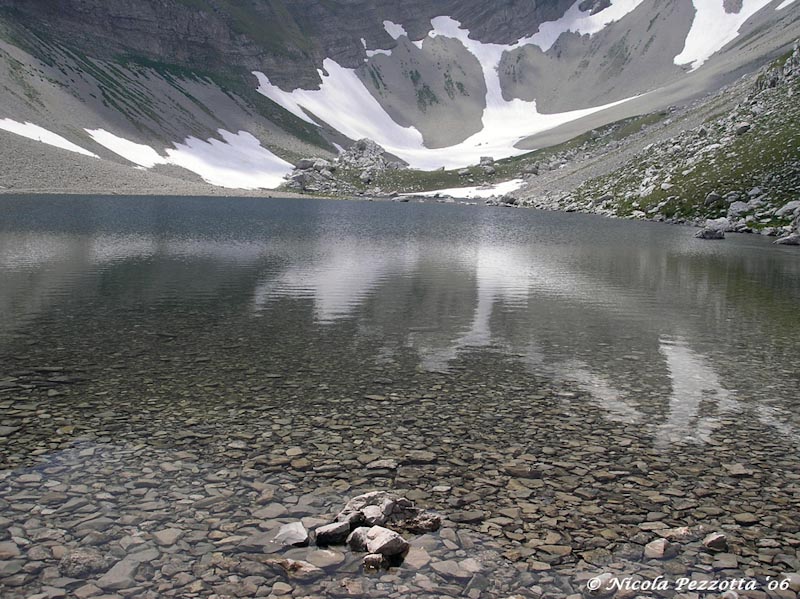 As already mentioned, his origins date back to about one million years ago, when, during the last glaciations (Riss and Wurm), the slow but inexorable effect of the glaciers strongly contributed to mould this area, creating the typical U profiles and the morainic deposits. The semiperpetual glaciers around the little lake are the last traces of the ancient glaciers. Basing on the presence of bowls and karst holes in the surrounding areas, its origin is believed to be determined also from the karst effect in addition to the glacial effect. Once oval-shaped, today it takes the typical "glasses" form. During winter the lake doesn't even exist, replaced from a snowy and a few metres thick blanket. 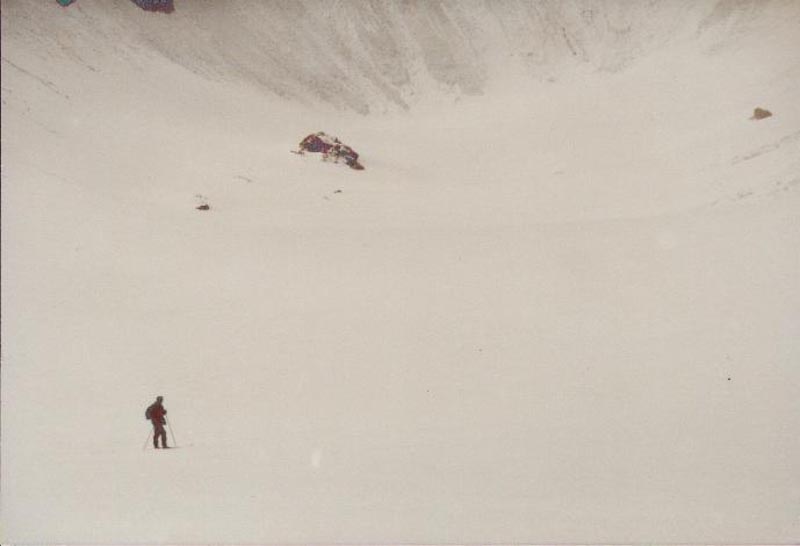 As the snow begins to thaw the lake slowly appears again, and in its top capacity it has a sole body; infact the morainic tongue is partly submerged and the little lake assumes the precise form of a pair of glasses connected by the natural thin little middle bridge. While decreasing the snowfalls, the lake level goes down and the moraine gets more and more exposed, until the water is split in two different parts. This separation has become more evident in the last decades because of the constant landslides of several debris coming from the near mountains. Moreover the level of water frequently changes during summer, because of the lack of inlets. On the contrary the effluent is hypogeum. In spring there is the only trace of this effluent. In this period, but sometimes even at the beginning of summer, nearby the lake, a little bit nearer to the valley, we can see La Fonte del Lago (The Source of the Lake), the only source of this valley (together with Fonte Matta, Crazy Source, which, being crazy, is not perpetual). Lots of people believe that the lake is also the real source of the river Aso. This river shows its course on the surface only from Foce di Montemonaco, so that this is normally considered the source of the river.

Nearby, the harsh weather conditions prevent the arboreal species from growing. The vegetation then consists in altitude grasslands dominated by grass family like Appennine Sesleria, Festuca dimorpha and Fetuca violacea. Moreover in these grasslands there is a great number of rare and endemic Flora species, which exclusively belong to the Appennine mountains, like Appennine Edelweiss (Leontopodium alpinum), Appennine Genepi, yellow Appennine poppy and many species of Saxifraga. 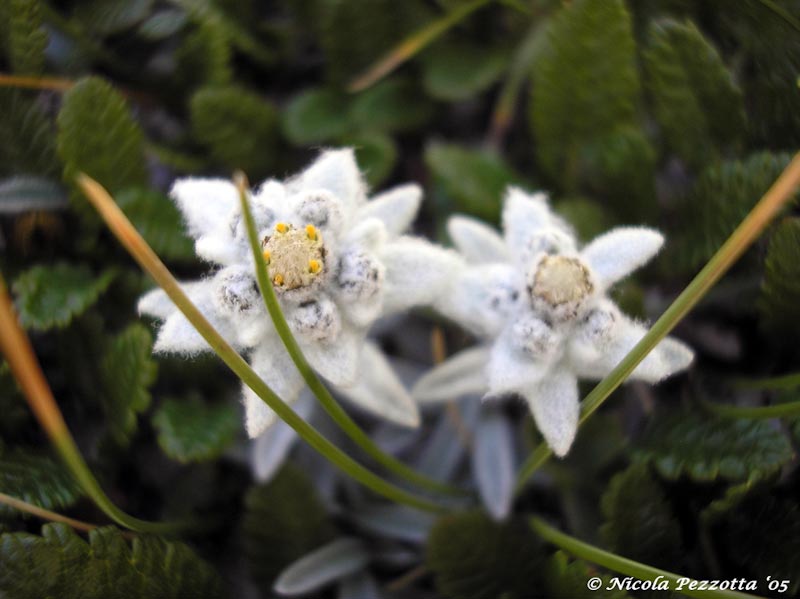 The Fauna on the other hand, is the typical one of the high mountain environments. About birds we have to mention the Rock Partridge, the Peregrin Falcon, the Snowfinch, the Alpine Accentor, the Alpine Chough and the Red-billed Chough. In addition there is the Orsini viper, an almost harmless viper that can be found in Italy only on the highest mountains of the Central Appennine.

The lake is considerably rich in pelagic zooplankton. In 1953-54, during a hydrobiologic research campaign, which was organized from the botanic institute of University of Camerino, a shellfish of a new species was found in the lake.

It has been named Chirocephalus Marchesonii after the person who discovered it. This small shellfish (1 cm long) lives here and nowhere else in the world. He's really slow when he moves, so that it's easy to pass your hand beneath, while he's swimming, and catch him. But this would be cruel: the Chirocephalus is used to his water temperature, just above zero, so even if he stays only a few minutes the water in the palm will be heightening in degrees, and the little animal will die. 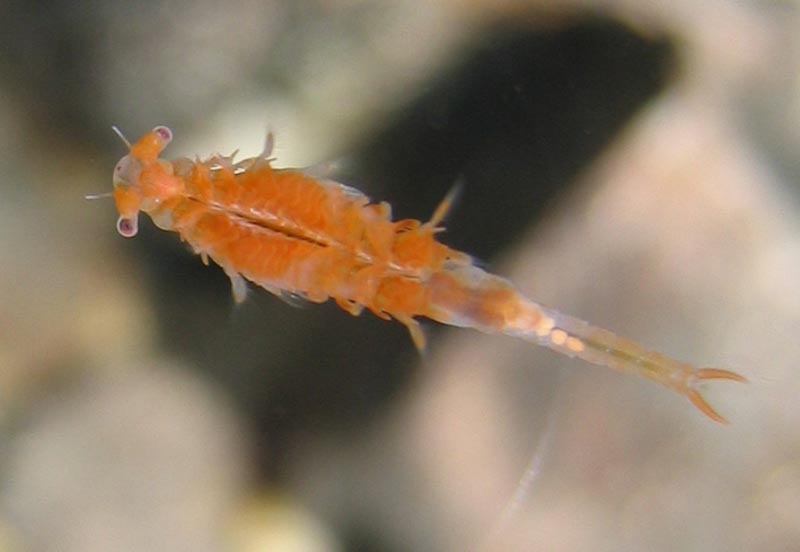 In 1990 he seriously risked extinction when, after two particularly dry summers, the lake was dried up. While the level was relentlessly going down, frantically trying to save the Chirocephalus, the experts formulated some suggestions, and the one that looked like the easiest to execute was transferring water (rather ice-cubes), travelling back and forth with helicopters and planes. Providentially the project didn't carry out because the different temperature, and the different acidity level that the new water would have had, would have been fatal for the shrimp. So the lake in the summer of 1990 dried up, and many people thought it was the end of the Chirocephalus. 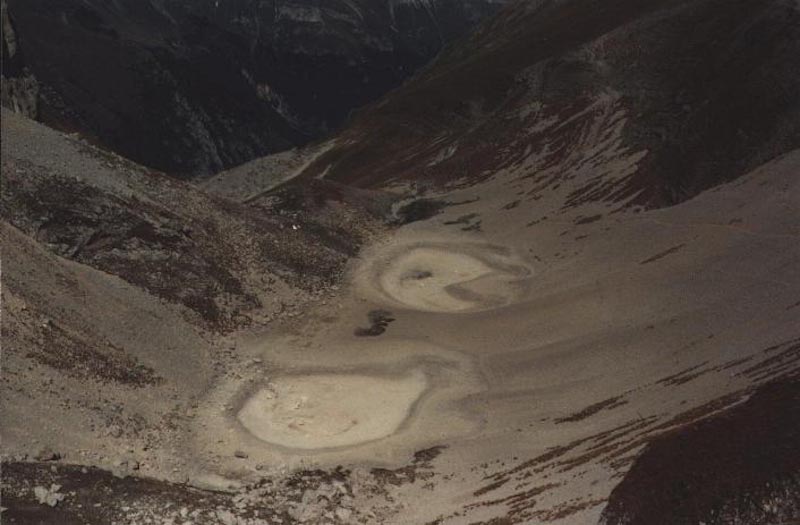 On the contrary the winter of 1991 has been particularly rich in snowfall, and in fact in Castelluccio di Norcia, at the foot of the Vettore, a 14 metres thick was measured! While the lake was forming again, during the next spring, here it was the Chirocephalus showing up again, brisker than ever. What happened? That's simple: the Chirocephalus died indeed, but before dying he had laid his eggs, which, unlike their owner, hold out extraordinarily, so that they can resist two-year dry period, hidden under the stones of the floor. When the water came back the eggs hatched and the shrimp made the lake charming again.

Since 1990 the lake Pilato risked once again the dissolution. What resulted really dangerous in these two periods was above all the mediatic can can, caused and kept alive by private and public personalities on different levels. The worst role was played by the habitual politicians, but unfortunately even some academic personalities played their part. These "professors" planned a series of cement tanks to be placed along the valley; luckily this project didn't come out. The lake is meant to disappear, this is certain: the glaciers of the Alps are reducing, the peripheric ones are disappearing, and the lake will be starting drying up more and more frequently.When we mention polluting emissions, the greenhouse effects, etc, why does nobody seem to be worried, and then cries in an undignified way as soon as the first effect show up?

Let's now enter the legends that permeate this place. No, let's rather talk about it in the next post! ;)